Be sure to come check out our new blog at The Minutes where you’ll find features like the following and much more!

DOES YOUR WATCH HAVE BALLS?

The Van Cleef & Arpels ‘Midnight Planetarium Poetic Complication’ by watchmaker Christiaan van der Klaauw, is a hypnotic astronomical timepiece bearing a miniature solar system that you can wear on your wrist. Ok, maybe the title of this post is a tad crass but the fact is the watches below have the balls to use spheres of […]
Read More »

the coolest wood watches EVER MADE

There is no denying mid-century design was particularly special for art, cars & furniture but also true for a variety of watch designs. It was a period of experimentation with minimalism, asymmetry and new materials which opened the door for the use of wood in timepieces. Introduced in the late fifties and […]
Read More »

PUTTING SOME STEAM BACK INTO STEAMPUNK

This week, we’re revisiting an old friend, Japanese Steampunk watchmaker, Sueyoshi Haruo (also referred to as Haruo Suekichi), featured nearly a decade ago on The Watchismo Times blog. Having created thousands of custom built Steampunk watches, all nearly one of a kind and with completely hilarious mechanical functions like flapping leather dragon wings to celebratory noisemakers and […]
Read More » 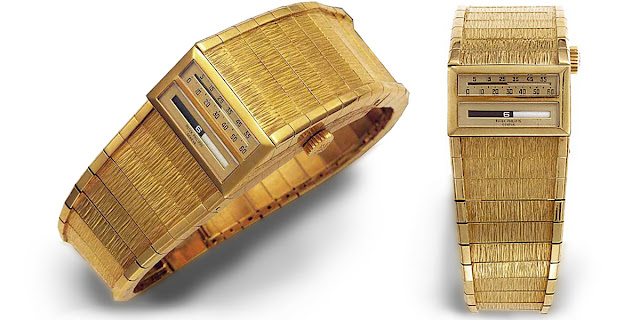 WHAT’S THE COOLEST WATCH NEVER MADE?

Far ahead of its time, the 1958 Patek Philippe Cobra concept watch was doomed. Destined to torment space-age vintage watch collectors like myself, this watch exists only as a one-off prototype designed by renowned avant garde watchmaker Louis Cottier eight years before his death in 1966. Unique for its linear time display and […]
Read More »

Andrew Grima was a famous British mid-century modern jewelry designer, commissioned to create unusual one-of-a-kind watches for Omega and Pulsar in the 60’s & early 70’s. He was commissioned by Omega to create a highly aesthetic avant-garde collection called ‘About Time’. Grima was given a free hand and chose to stick to one principle: he would […]
Read More »

If you ask us, we wholeheartedly believe there has been …read more