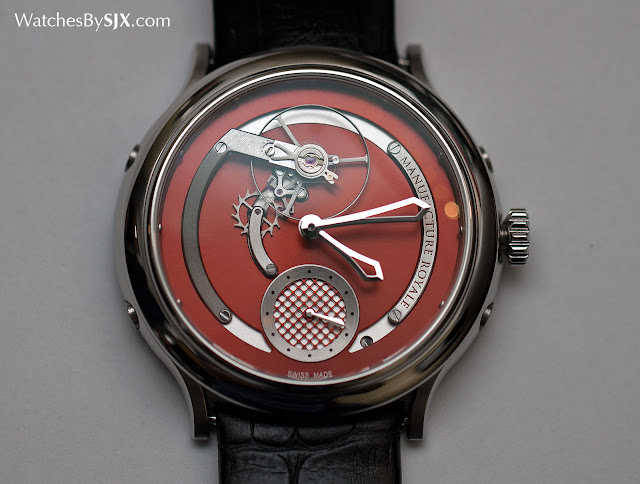 Independent watchmaker Manufacture Royale recently introduced its entry-level timepiece, the 1770 Voltige, featuring a self-winding movement that has an oversized balance wheel, along with the escapement, on the dial.

A time-only wristwatch with an unusual movement, the 1770 Voltige is the simplest watch to emerge so far from Manufacture Royale. French for aerobatics, Voltige refers to the balance wheel and escapement that are elevated into prominence on the dial. Extra-large with a diameter of 14mm, the balance is thin and made from a lightweight alloy, beating at a serene 21,600 beats per hour.


Once founded by Voltaire

Named after a watch factory set up in 1770 by the philosopher Voltaire during his exile in Geneva, Manufacture Royale was established in 2010 and is actually the sister company of TEC Ebauches, a movement and component manufacturer. The two share the same premises and Manufacture Royale enjoys the manufacturing expertise of TEC Ebauches, allowing it develop several movements, including a tourbillon as well as the MR05 found in the 1770 Voltige. Having its own manufacturing facilities is one reason why Manufacture Royale has managed to keep its prices reasonable – the Voltige costs SFr27,000 in steel – while making just 200 watches a year.

The 1770 Voltige reimagines the traditional architecture of a watch movement. Immediately reminiscent of the MB&F LM101 (and also the pricier LM1), the balance wheel is the focal point of the dial. A long, sweeping bridge curves upwards to a balance cock, with the pallet fork and escape wheel secured by smaller bridges just beneath. The hour and minute hands are suspended above everything else on the dial.


The watch pictured is a prototype, hence the unattractive Etachron regulator index (the v-shaped component adjustment to a screw head) taken from a stock ETA movement. The production version will be fitted with a customised regulator index. 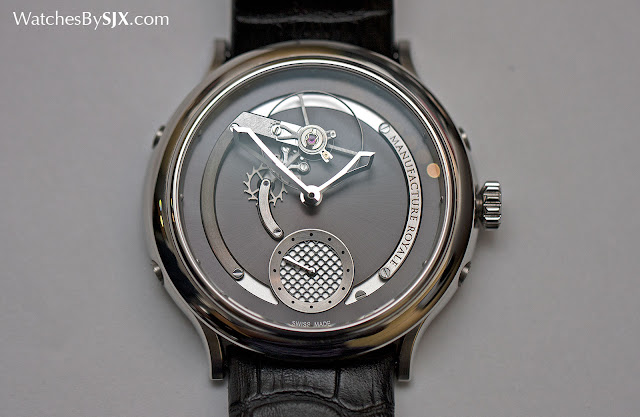 Though the highlight on the front is the balance and escapement, the rest of the dial offers up some interesting details. It’s made up of multiple components, with varying colours and textures. The sub-seconds, for instance, is made up of a honeycomb mesh with a countersink around it. And a plate with the brand name is attached to the dial to mirror the long tail of the balance cock.