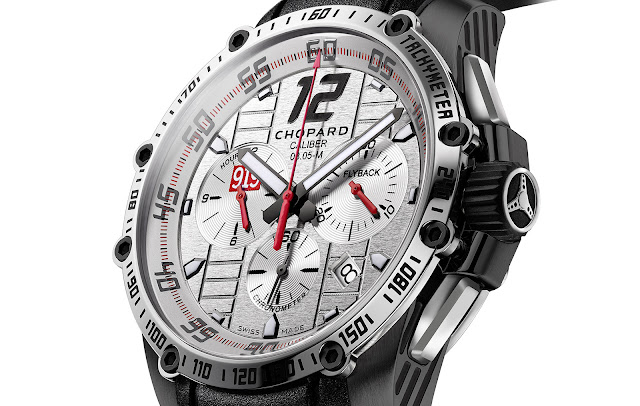 For Only Watch 2015 Chopard has created a unique version of its Superfast Chrono Porsche 919, the only one ever made in titanium with a black DLC coating.

Chopard‘s contribution to the Only Watch charity auction is the titanium Superfast Chrono Porsche 919, the first and only time it has been made in the lightweight alloy. It’s also signed on the back by Mark Webber, now on the Porsche Le Mans team and former Formula 1 driver.


Equipped with the calibre 03.05-M, a sophisticated movement developed and made in-house by Chopard that’s derived from a similar movement developed for the L.U.C. line of watches. The Superfast Chrono Porsche 919 is inspired by the Porsche 919 Hybrid, a prototype competing in the FIA World Endurance Championship.

The stripes on the dial, for instance, take their cues from the rear diffuser of the car, while the crown is topped with a steering wheel. It’s one of many auto-racing inspired wristwatches made by Chopard, the official sponsor of the Mille Miglia.

Usually available only in steel or rose gold, the 45mm case of this unique version is made of titanium, coated with black diamond-like carbon (DLC), a scratch resistant coating. The titanium case back is engraved with Mark Webber’s signature. The Superfast Chrono Porsche 919 Only Watch 2015 will be sold on November 7, 2015, at an auction in Geneva, with proceeds going towards supporting research into Duchenne muscular dystrophy.